MeRegioMobil aims at developing and building up the infrastructure for a large number of electric vehicle users in Baden-Wuerttemberg in 2010 and putting it to a regional field test by the end of 2011.

Along with the installation of intelligent battery-charging stations and the usage of batteries as dynamic buffer storage systems in the power grid, the project additionally comprises the development of new business models and incentive systems as well as the conception of novel location-based telematics services.

Prior to the field test and accompanying it later on, a research and demonstration laboratory has been built up and is operated by the KIT. The focus of this lab is to implement an adaptive cooperation of intelligent appliances for reasons of efficient load control while integrating both decentralized power plants and electric vehicles which are able to feed back energy stored in their batteries into the grid. Supplementary simulation scenarios will provide an opportunity to investigate scaling effects.

The project is subdivided into the following working areas. 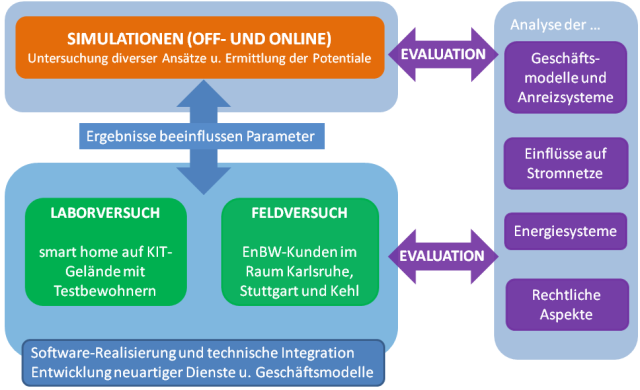 Electric vehicles will be integrated into a research and demonstration laboratory in order to facilitate the practical application of the developed concepts in a realistic setting.
The laboratory is a prefabricated house with a floor area of about 60 m2 and represents a prototype for a smart home with its characteristic elements, such as decentralized power plants, consumer loads, and energy storage systems.
Among other energy sources, photovoltaic panels as well as a micro combined heat and power plant will be put in place. Typical electric appliances, such as a washing machine, a dish washer, or a refrigerator, are supposed to serve as consumer loads. The electric appliances employed in the project represent both conventional commercially available devices as well as intelligent and therefore controllable
ones. A battery-charging station will also be integrated into this laboratory, so that electric vehicles can be incorporated into the smart home both in forms of consumer loads and electrical storage systems.
As a buffer, the battery can store surplus renewable energy during off-peak hours and feed the stored electrical energy back into the grid when needed in order to respond to peak loads.

The technical and economic concepts validated during the laboratory test and proved to be feasible in the project will be tested within the scope of a large-scale field test planned in the area of Karlsruhe, Stuttgart, and Kehl.
The study of cross-border roaming will be carried out in cooperation with “Electricité de Strasbourg”. The objective of the field test is to construct and test the technical infrastructure as well as novel value-added services that will support energy and storage management.

As a part of the MeRegioMobil project, simulation components will be developed and employed, so that a large variety of concepts elaborated during the project runtime can be closely examined and analyzed, including the identification of their potentials.
Based on these results, different concepts can be singled out and tested during the laboratory or field test, with the results being thus verified. In addition to this, alternative approaches can be analyzed in a simple and quick manner.
The simulation scenarios comprise analyses of consumption behavior, business models, underlying information and communication technology (ICT system), long-term consequences as well as effects arising from the large-scale implementation of the developed concepts. The simulations will be carried out in coordination with real experiments, parameters of the simulation components being constantly adjusted and improved in accordance with the data gained from the laboratory and field test.

The concepts and technologies developed in the laboratory and tested during the field experiment will be subject to a constant evaluation that will be dealing with analysis and assessment of business models and incentive systems, impact on the power grid, energy system issues as well as legal aspects. The results of the evaluation will be continually incorporated into the parameters of the simulation and laboratory experiment as well as into the implementation of the field test, so that best possible findings can be derived.